I for one am glad that the Iowa Caucuses are over. The whole thing kind of reminded me of Halloween in January with all of the lunatics and crazies out. All of the back-slapping and sucking up to Ethanol farmers is over and now we can move on to other states and eventually to President Obama’s inevitable victory.

The results were disheartening but not surprising. It appears the God’s Own Party (the GOP, get it?) is as flagrantly anti-gay as ever. On top, we had Mitt Romney of the magic underwear cult who tried to block gay people’s happy day when he was governor of the Gay State. He’s such a judegmental, judging hatemonger bigot just like all Mormons. For more on that particular church see my anti-Mormon hate site on the right, “Stop the Mormons”. Then there was Michele “Pray Away the Gay” Bachmann who finished dismally, thank goodness. Her husband’s obviously a repressed homosexual; did you know that? Toward the bottom of the heap was Rick “I’m Not Ashamed to be a Christian” Perry. If he’s going to be a Christian, can’t he at least have the decency to be ashamed? Rick “Man-Dog Sex” Santorum was the surprise of the night, proving that you can still be a contender in the Republican Party and hold Roman Catholic beliefs, something that I think our Constitution prohibits.

I was really supporting the Texan Ron Paul until I found out that he doesn’t think that government should be in the marriage business. That really upset me. If I can’t get the government to recognize my marriage, that means I can’t force others to recognize it under penalty of law. I like to tell people that I just want the government out of my life, out of my bedroom, and out of my relationships. But that’s just another one of those lies that keeps dribbling out of my mouth like Michael’s spooge on a Saturday night. If that’s all I wanted,  I already had that before marriage equality came to my state. In fact, homos can have that in every state, even Mississippi. Nope, we want the government more involved in our personal lives, not less.  We want our relationships to be formalized and contractual. So when we say that we just want the government out of our lives, we actually mean exactly the opposite.

With Ron Paul, we wouldn’t be able to do that. No one would be forced to recognize my marriage, which defeats the purpose.

You can imagine how disappointed I was to learn that Ron Paul is in fact no different than the others. He likes to tell people that he’s a “defender of the Constitution” but then he turns around and denies the separation of church and state. Everyone knows that those words in the Constitution–right there in the first amendement. Well, I can’t find them, but I’m sure they’re there. If you don’t believe that, you’re probably a member of the Christian Taliban. Here’s what Paul actually said about the separation of church and state:

“In case after case, the supreme Court has used the infamous ‘separation of church and state’ metaphor to uphold court decisions that allow the federal government to intrude upon and deprive citizens of their religious liberty. “

That’s the PURPOSE of the first amendment, you dolt! It isn’t to defend people of faith from the government. It’s to defend me from people of faith. They’re scary and the government needs to restrain them. The Constitution guarantees my right to never see or hear anything that might involve God, and it mandates the religious loons check their values outside the voting booth or else forfeit their right to vote.

Yeah, next thing we know he’s going to want to stone people for adultery. He continues:

“This ‘separation’ doctrine is based upon a phrase taken out of context from a letter written by Thomas Jefferson to the Danbury Baptists on January 1, 1802.”

Jefferson was a deist. That’s what I heard anyway. And even though he wasn’t involved in the drafting of the Constitution because he was the ambassador to France at the time, I’ll look to his words, taken out of context, for guidance. Only because he said what I want to hear. After all, he’s the expert. Jefferson’s words trump the actual text of the Constitution.

Paul doesn’t have such a great track record with teh gheys. He even opposed Lawrence v. Texas on the grounds that the Constitution doesn’t actually guarantee a right to sodomy! Can you believe that? I did a quick google search and determined that the word “sodomy” appears nowhere in the Constitution, much less a right thereto. But in 2003, a bunch of justices said that it did. And I agree with them because I like sodomy. I’m sure it’s emanating somewhere in the penumbras.

Batty ol’ Ron Paul disagrees. As he wrote in an essay found at Lewrockwell.com :

“Consider the Lawrence case decided by the Supreme Court in June. The Court determined that Texas had no right to establish its own standards for private sexual conduct, because gay sodomy is somehow protected under the 14th amendment “right to privacy.” Ridiculous as sodomy laws may be, there clearly is no right to privacy nor sodomy found anywhere in the Constitution. There are, however, states’ rights — rights plainly affirmed in the Ninth and Tenth amendments. Under those amendments, the State of Texas has the right to decide for itself how to regulate social matters like sex, using its own local standards. But rather than applying the real Constitution and declining jurisdiction over a properly state matter, the Court decided to apply the imaginary Constitution and impose its vision on the people of Texas.“

I get it. He wants the federal government out of our bedrooms. But the fifty state governments are still okay. 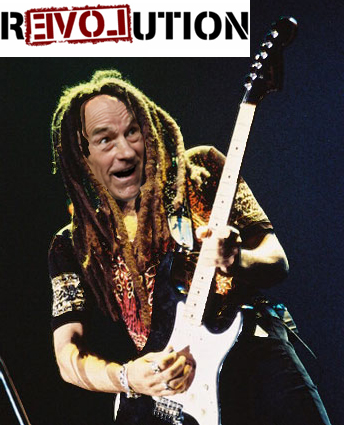 Ron Paul: He's a rock star to the youth voters. To me, he's just another Republican BIGOT.

It’s almost as if he’s saying that there are no sexual rights in the Constitution, and thus the issues are for the states to decide. But I’d like it much better if there were sexual rights in the Constitution. And because I want them there, that means that I support any judge who imagines them to be there and rules accordingly. It’s so much easier to just have a judge strike down all of the laws I don’t like than it would be to do the hard work of changing minds and laws in all fifty states. Less messy, too.

It doesn’t matter at all to me whether there’s a “right to privacy” in the Constitution. Those words aren’t there, but neither are “right to sodomy” or “separation of church and state”. If we were to go down that road of only accepting words contained in the Constitution as legitimately constitutional, we’d be in a world of trouble. I prefer a living, breathing document–it says what I want it to say.

Ron Paul even advocates the bizarre theory that homosexuals get AIDS from their sexual behaviors. That’s not true. We get AIDS from Ronald Reagan and the Catholic Church. Everyone knows that. As he wrote in his January 1990 newsletter:

‘The ACT-UP slogan on stickers plastered all over Manhattan is ‘Silence=Death.’ But shouldn’t it be Sodomy = Death’?

That is just ABSURD! He’s  insinuating that the best way to avoid getting AIDS is to stop taking it up the ass! That’s just irresponsible, especially coming from a medical doctor. He’s blaming the victim. It’s like telling someone that the best way to avoid lung cancer is to quit smoking, or the best way to avoid obesity is to watch their diet. Actions do not have consequences and I loathe people who tell me that they do. Science is very clear on this: there is no known connection between butt sex and AIDS. They are two completely unrelated concepts. He needs to go back to med school. 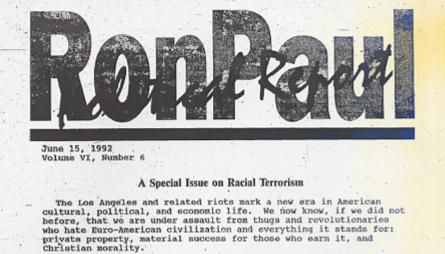 His newsletters are a treasure trove of homophobic delusions. Oh, here’s another one from September 1994. Watch out for malicious gays!

“those who don’t commit sodomy, who don’t get blood a transfusion, and who don’t swap needles, are virtually assured of not getting AIDS unless they are deliberately infected by a malicious gay.”

Hey, I do know a few malicious gays who do stuff like that, but only to other willing partners. Fully knowledeable that they are HIV positive, they head on down to the bathhouse and engage in group sex with lots of other guys. Bu those other guys being infected already fall under the first category: those who commit sodomy. Not that sodomy has anything to do with AIDS.

Oh, what a disappointment he turned out to be. I thought he was the face of a new, sodomy-friendly GOP. And it turns out that he’s the worst of the bunch! If it were between him and Santorum, and I absolutely had to choose one or the other, I think I might have to choose ol’ Man-Dog sex. At least he looks handsome in a sweater vest. (Okay, so I fantasize about him, just like Dan Savage does). Ron Paul just looks like a wrinkled old prune.

I took this picture of Ron Paul two winters ago while he was chopping ice. I was trying to catch a glimpse of his cock, but it was kind of shriveled in the cold water.