Who’s up for hate-fucking some Republicans?

The fallout continues over Marcus and Michele Bachmann’s wacky, zany, “pray away the gay” therapy clinic. I think you’ll all agree with me that the blowback has been delicious.

So I was watching Real Time with Bill Maher the other night just because I heard that one of his panelists was going to be Dan Savage, my favorite gay sex columnist and an all around sick puppy. Of course, Bill brought up the topic of the Bachmanns and their clinic. It didn’t take more than a few seconds before someone threw out the old “Marcus Bachmann is obviously a repressed homosexual” line, and the fun began. Let’s just say that the banter that followed was hilarious.

Surprisingly, it wasn’t Maher or Savage who really got it started. It was comedian Marc Maron.

“I don’t want to be crass, but I just hope that Marcus Bachmann takes all that, ya know, that rage that comes from repression and denial and brings it into the bedroom with [Michelle]. I hope he fucks her angrily, because that’s how I would. And I’ve thought about it.”

Is that funny or what? Certainly not “crass”. He’s daydreamed about giving it to Michele Bachmann…with malice! Ha Ha! The audience lapped it up, laughing and hooting. Everyone knows that Bill Maher has one of the hippest, savviest, coolest audiences in all of television. I know that I was laughing so hard I nearly spilled my Zima all over myself. I was just whooping and slapping my knees. Ha! Ha! Rape jokes are funny! 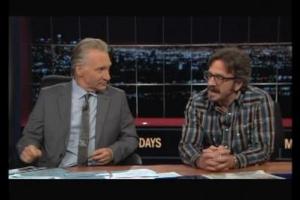 Bill Maher and Marc Maron chat about raping a congresswoman. HBO represents the best in television.

Now, I know that may sound like he was admitting to rape fantasies. I mean, it’s hard to imagine a woman consenting to being “fucked angrily”. Consensual hate-fucking seems like a contradiction in terms. Here you go bitch. I’m going to manhandle you. Lay still while pound you. Squeal for me bitch! Squeal for me! And for this guy to have fantasies about it, well…it sounds like he’s got some issues with misogyny that he needs to deal with.

Normally, I would be against that kind of thing. Rape, I mean. Or even just misogynistic fantasies. But this is Michele Bachmann we’re talking about. She’s a right-wing Christian and basically less than human. And so it’s really funny. That’s why the audience roared. No one was laughing harder than me. I’d fuck her angrily myself if it weren’t for the fact that I don’t like women.

It appears that Dan Savage detected the subtle misogyny in Marc Maron’s jokes, so he immediately leapt into action, providing cover for Marc’s comments.

“Just so you don’t get charges of sexism, because only Michele Bachmann was involved. I sometimes think about fucking the shit out of Rick Santorum. Just ’cause I think he needs it. It’s not just women we are talking about fucking. It’s like, ‘let’s bone that Santorum boy.’”

Nice save, Savage! See, so if you balance a disgusting, hateful, violent joke about raping a congresswoman, with another joke in which you joke about “boning that Santorum boy”, it makes everything okay. The “sexism” (or misogyny) of the first joke is negated by the sheer perversion of the second. The fact that they were made by two different people doesn’t matter. Savage’s fantasies of boning Santorum (with malice, I would presume) redeem Maron’s jokes about raping Michele Bachmann. See? No harm, no foul.

Heroic Dan Savage. He wants to sodomize a former US Senator who really "needs it". I love this guy. He says everything I've been thinking but have never had the words to express. Sodomy with Rick Santorum is something I've always dreamt of. Notice the shirt: "Google Santorum".

Dan continued in the same vein, adding, “I’d be up for whipping up some Santorum in Santorum.” The crowd went wild for that one too. For those of you who don’t keep abreast of LGBTQXYZ slang, urbandictionary.com defines “Santorum” as follows:

Apparently, the inventor of that handy phrase was none other than…Dan Savage! Yes, Dan Savage invented the term for the substance I always find in my underwear after my husband (or someone else) sodomizes me. And to think that some people think that butt sex is gross. What’s gross about spooge, fecal matter and KY-Jelly? Savage calls it Santorum, which is pretty funny because we know that the name would bother the actual guy named Santorum. And that’s what we like to.
Dan Savage is always prepared to offer his own brand of incisive social commentary. Some of you may remember his recent throwing of the gauntlet to John Cummins of the British Columbia Conservative Party. After Cummins said that homosexuality is a “conscious choice”–but before he was dragged off to one of those Stalinist “hate speech” show trials they’re so fond of in Canada–Dan Savage offered him what he called the “Choicer Challenge”.

“What if being gay is something people consciously choose? Gee, if only there were a way for choicers to prove that they’re right and everyone else is wrong… actually, there is way for choicers to prove that they’re right! I hereby publicly invite—I publicly challenge—John Cummins to prove that being gay is a choice by choosing it himself.  Suck my dick, John. I’m completely serious about this, John. You’re not my type—you’re about as far from my type as a human being without a vagina gets—but I have just as much interest as you do in seeing this gay-is-a-choice argument resolved once and for all. You name the time and the place, John, and I’ll show up with my dick and a camera crew. Then you can show the world how it’s done. You can demonstrate how this “conscious choice” is made. You can flip the switch, John, make the choice, then sink to your bony old knees and suck my dick. And after you’ve swallowed my load, John, we’ll upload the video to the internet and you’ll be a hero to other choicers everywhere.”

Boo-yah! Score one for Savage! He offered the bigoted Canadian MP the opportunity to suck his dick, and because Cummins chose not to, that means that there’s no “choice” involved. Other than the choice Cummins exercised not to smoke Dan Savage’s pole. But that only proves my point.

You may also remember Dan Savage as “the doorknob licker”. No, that’s not some kind of new-fangled homophobic slur. He actually licks doorknobs. And staplers, and telephones. He brags of it, in fact. In 2000, Dan Savage visited Gary Bauer’s Presidential HQ in Iowa, where he snuck into the office and started licking objects in an attempt to spread his flu virus to staffers, and hopefully, to the candidate himself. Bauer is an ultra-right wing evangelical Christofascist loser. Just keep that in mind as you read Savage’s account of his germ warfare campaign:

I go around the room licking doorknobs. They are filthy, no doubt, but there isn’t time to find a rag to spit on. If for some reason I don’t manage to get a pen from my mouth to Gary’s hands at the conference, I want to seed his office with germs, get as many of his people sick as I can, and hopefully one of them will infect the candidate. I lick office doorknobs, bathroom doorknobs. When that’s done, I start on the staplers, phones, and computer keyboards. Then I stand in the kitchen and lick the rims of all the clean coffee cups drying in the rack. I grab my coat and head out.

It must have taken real courage to lick all of those “filthy” things. Icky. Well, I personally have no qualms with filth or with licking filthy things. I’ve never met a gay man who did. I kind of thought that it was a prerequisite for being a gay man that you actually liked filth and licking stuff. Anyway, read the whole thing here:

Well known Christofascist Gary Bauer. I hope he caught the flu from Dan Savage. Or any other communicable disease that Dan Savage has. Which is probably a pretty long list. I think right-wing bigots like Bauer deserve viruses.

When Dan acts this way, he’s just being true to himself. He was born this way. If you think he’s a real sick individual, maybe you’re just a prude. Keep up the good, work Dan! And Bill, and Marc. You’re doing great work. Remember, hate-fucking Republicans is funny.