I take pleasure in announcing another great victory for the movement towards full equality. We are now depriving third world children of shoes!

Recently, entrepreneur and TOMS shoes founder Blake Mycoskie appeared at a speaking engagement sponsored by the anti-gay, anti-choice, “Focus on the Family”. I’m pretty sure these people don’t believe in dinosaurs, actually. Focus on the Family is so evil that they must not be allowed to do good. In fact, if they try, we should prevent them from doing good. 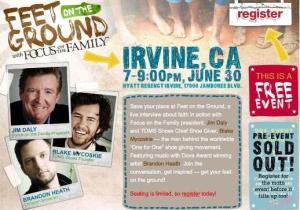 Focus on the Family flyer advertising its "Feet on the Ground" event with Blake Mycoskie. Very incriminating. This flyer is very hateful. It appears that Focus on the Family is conspiring with a shoe manufacturer to...distribute shoes to poor people! This is the smoking gun.

Here’s all you need to know about Focus on the Family. They oppose gay marriage, just like half of the country. They oppose abortion, just like a slim majority of the country. They don’t believe in evolution just like 61% of Americans.  And they’re VERY much on the fringe. They’re not hip, they’re square. They’re basically the mothership of the Christofascist movement. Focus on the Family also sponsors an annual “Day of Dialogue” in which they encourage students to talk about “God’s plan” for sexuality. The day is scheduled to coincide annually with the pro-gay National Day of Silence. Personally, I don’t really care about “God’s plan” for my dick. I care about my plan. In any case, the National Day of Silence is a time for people to shut up. The name of the day is very clear. They want dialogue and we want SILENCE!

When word got out that Mycoskie was associating with the likes of Focus on the Family, the shit hit the fan. The feminists went berserk, and so did the sodomites. The gay blogosphere was abuzz with vitriol for TOMS. I immediately ran to my shoe closet to see if I owned a pair. After searching through the seventy pairs of shoes I own, I found that in fact, I DO own some of TOMS shoes. They’re pink and they have sequins on them. I ran to the deck and hurled them out into the ocean just to show my disgust for Mr. Mycoskie and his company. 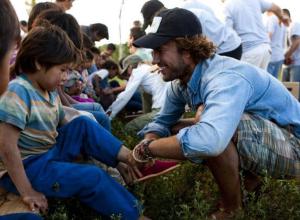 Blake Mycoskie, founder of TOMS shoes and known accomplice of the Focus on the Family hate group. He stepped off the reservation for just a second, but we brought him back into line. Here he is distributing shoes to some impoverished kid in the third world, which he does quite a bit. Just one question: Is the handsome young gentleman single?

Ms. Magazine immediately started an online petition asking TOMS shoes to drop any relationship with Focus on the Family. LGBTQXYZ people and their allies alerted each other via facebook and twitter to get over there and sign the petition. It didn’t take more than a few minutes before the handsome man got back on the right side of things. Let’s face it, we homos have POWER! We just have to pretend that we don’t so that we can continue to perpetuate the myth that we’re poor, downtrodden victims, abused by society. We’re nothing of the sort.

Irene Carmon of Jezebel.com explains her thinking in regards to TOMS shoes and Focus on the Family:

“There’s nothing inherently political about distributing shoes to African children, of course. In theory, it’s a good thing for Focus to spend less time trying to police sex and more actually helping people, but they’ve not really cut back on the former. And Focus On The Family isn’t the only group TOMS could have turned to for collaboration, nor is it the only Christian group involved in charitable missions. It carries significant cultural and political baggage, for good reason. TOMS is at major risk of alienating a constituency that has enthusiastically adopted their product, including yours truly.”

I couldn’t agree more. For years, I’ve said that “Christian” groups like Focus on the Family should spend more of their time and effort trying to feed and clothe the poor and less of their time worrying about sodomy and baby-killing. When I phrase it that way, it sounds like a zero sum game, as if they can’t do both. Every time you say that homosexuality is wrong, another child dies in a third world village. It’s just one of many schemes I’ve come up with to shut people up. It makes them feel like a “bad Christian” for opposing my agenda, and that’s what I want them to believe.

The truth is that the Christian groups that I hate so much DO perform lots of acts of charity to the poor. That really pisses me off. So when they actually take my advice and do what I think they should be doing, I get pretty upset about that too. I’d rather the kids not have shoes if hateful, hate-mongering haters are going to have anything to do with it.

Mr. Mycoksie quickly distanced himself from the far-right hate group with an official apology:

Had I known the full extent of Focus on the Family’s beliefs, I would not have accepted the invitation to speak at their event. It was an oversight on my part and the company’s part and one we regret…Furthermore, contrary to what has been reported, Focus on the Family is not a TOMS giving partner. So there is no misunderstanding created by this mistake, let me clearly state that both TOMS, and I as the founder, are passionate believers in equal human and civil rights for all. That belief is a core value of the company and of which we are most proud.

Nice apology, I suppose. I went down to the waterfront after I read that to see if I could fish my pink shoes out of the ocean, but it appears they are gone. I’ll check again at low-tide.

TOMS Shoes is a big fan of helping poor children. I'm just glad they don't allow their love for children to overshadow their hate for Christians who actually believe the Bible. It's more important that we shun and punish those we disagree with than to acheive humanitarian goals.

Mycoskie stressed that Focus on the Family will NOT be part of the “One-for-One” program that gives shoes to children in the third world.  For each pair of shoes you buy, TOMS donates one pair to needy children. Mycoskie learned the value of shoes during his trips to Argentina, where he sometimes encountered people who had none. TOMS explains on its website why shoes are so important:

1. Many children in developing countries grow up barefoot. Whether at play, doing chores or going to school, these children are at risk:

2. A leading cause of disease in developing countries is soil-transmitted diseases, which can penetrate the skin through bare feet. Wearing shoes can help prevent these diseases, and the long-term physical and cognitive harm they cause.

3. Wearing shoes also prevents feet from getting cuts and sores. Not only are these injuries painful, they also are dangerous when wounds become infected.

TOMS also partners with other organizations in order to further its mission. From a video on their website:

“We partner with humanitarian and health organizations around the world. They can help us give shoes year after year, providing shoes to the same children as they grow.

But they won’t partner with Focus on the Family and I’m glad for that. If that means that thousands of kids will have to go barefoot and get communicable diseases and other icky stuff like that, then I suppose that’s the way the cookie crumbles. If that means that they can’t go to school and get an education, I’m fine with that too. If their little feet get cut up and infected, that’s just too damned bad. I’d hate to think that somewhere in Somalia or Myanmar there’s some kid walking around with a pair of shoes on his feet that were paid for by a homophobic American pastor. So it’s better this way. A lot better.

Thanks to all of you who signed the petition. TOMS shoes really heard us loud and clear!  As I’ve said before, we have corporate America in our pocket. We say ‘jump’, and they say ‘how high?’ Just remember–eternal vigilance is the price of guilt-free sodomy!